When I start to work with CEOs and business owners and other extraordinary leaders on their most ambitious goals, we often find they need to elevate their attention and get out of the operational detail.

Attention is one of the four Impact Multipliers. If you can focus your attention on the most strategic issues, then you can truly multiply your impact.

But most leaders have so much on their plate they’re drowning in busywork and operational detail. They find themselves with practically never-ending demands on their time - an infinity of messages, opportunities, and content to engage with. They find it’s incredibly hard to free themselves up and work on the most significant issues.

So I wrote a book about this exact topic! It’s in the hands of the editors and will be coming out towards the end of the year.

The problem is that most leaders have tried to implement advice about productivity and delegation, but they're still overloaded because there are so many factors at play.

So in the book I’m taking a different angle. I address the structural barriers, mindset issues, leadership challenges and behavioural factors that are keeping smart, experienced leaders from working on the most strategic topics.

The ultimate goal of the book is to help you diagnose and overcome the real issues keeping you and your team “in the weeds”, so that you can free up several hours each week and use that time for next-level activity that really moves you forward.

Here’s a sneak peak at just one small section. I’d love to hear your thoughts!

I could tell by the speed she was talking that something was wrong.

“I need to talk to you about two things today. I’ve got a problem with a team member and a big meeting coming up with the Head of Region.”

This was Susanna, a Cambridge-educated superstar who’d been promoted at a young age to the UK leadership team of a major pharmaceuticals company just a few months before.

I tried to slow her down: “okay, but how are you?”

“Fine really. Very busy but all good,” came the predictable reply. I could feel our conversation was still rushing along at the surface level.

Over the next few minutes I slowed her down some more, and it started to come out. The overload. The days stuffed from beginning to end with meetings. The relentless deliverables. The Sundays that were the only time she had to actually do focused work. The adrenaline, and the exhaustion.

As we continued to talk, we explored the bigger picture. I probed: What were the big outcomes she was really hired to achieve? It turned out that there were two key objectives that only she could really make happen; she was making progress on one, but the other had practically fallen off her radar.

"What were the big outcomes she was really hired to achieve? It turned out that there were two key objectives that only she could really make happen; she was making progress on one, but the other had practically fallen off her radar."

And as we talked further, she had another insight: it was well over a month since she’d spoken with her boss, the General Manager. The result: a lot of operational activity but very little understanding and alignment with her most important stakeholder.

Susanna was in ‘superhero mode’. The new leader arrives, strikes a power pose, and declares to the organisation: “don’t worry people, I’m here now!” - only to dive in to a million activities.

And the thing is, this kind of activity gets a certain level of result. It does make an impact. But we fall very quickly into what I call the Infinity Trap.

The Infinity Trap is when we’re super-busy delivering on what we see as operational necessities, but in reality we’ve succumbed to tunnel vision. We’re laser focused on this week’s deliverables, but we’ve lost sight of the bigger picture. 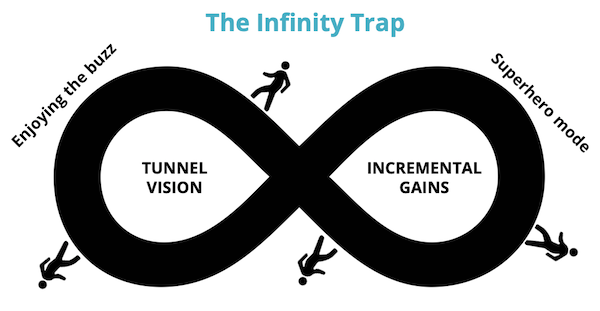 Chao was in a similar position. He’d just been hired as the Chief Revenue Officer of an innovative and very rapidly growing Fintech firm. The CEO and the board were asking him to increase his short-term revenue goals; his team were asking him to crack open his address book and set up high-level meetings; and he was still in the process of finalising and socialising his strategic plan to triple revenues in a couple of years.

As a result, he was working 17-hour days. Enjoying the buzz, but feeling that something was missing and that he was losing control of his agenda.

During our conversation I focused Chao on the critical conversations that he needed to have to deliver a successful outcome in the next 12 months. It turned out that there was a make-or-break investment decision that would be made with the CEO in an upcoming meeting. And because he’d been so busy, this meeting wasn’t getting the level of preparation it probably needed.

The Infinity Trap, once again.

As I’ve said, the demands on us are infinite. Every conversation begets another conversation. Every email stimulates more emails. We buy one book or watch one film, and ten more are proposed to us.

We think that sheer effort will see us through. And it’s worked for us in the past. When you’re in an operational role, heads-down focus on deliverables often gets good results. But in leadership, where you’re navigating complex, volatile and ambiguous situations, the Infinity Trap - tunnel vision - is deadly.

I invite you now to get honest with yourself. Where are you stuck in Infinity Trap?

There’s a deeper question here. What’s the payoff for you? What draws you in to the Infinity Trap? Personally, when I fall back into the Infinity Trap it’s because there’s a part of me that quite likes the adrenaline rush. For you, it might be the sense of being productive, being needed, or being in control. Realise that this is less about “needing to be heads-down right now due to short-term business pressures” and more about your own inner drives and habitual ways of operating. And when we change those, new possibilities for impact will open up.

I invite you to consider how the Infinity Trap is affecting you. Mentally zoom out. See yourself beavering away, trapped in busyness and suffering from tunnel vision. And then ask yourself, what are you not getting to? What's the one thing that will make everything else easier? What's the one conversation that will change everything?

Where are you stuck in the Infinity Trap? 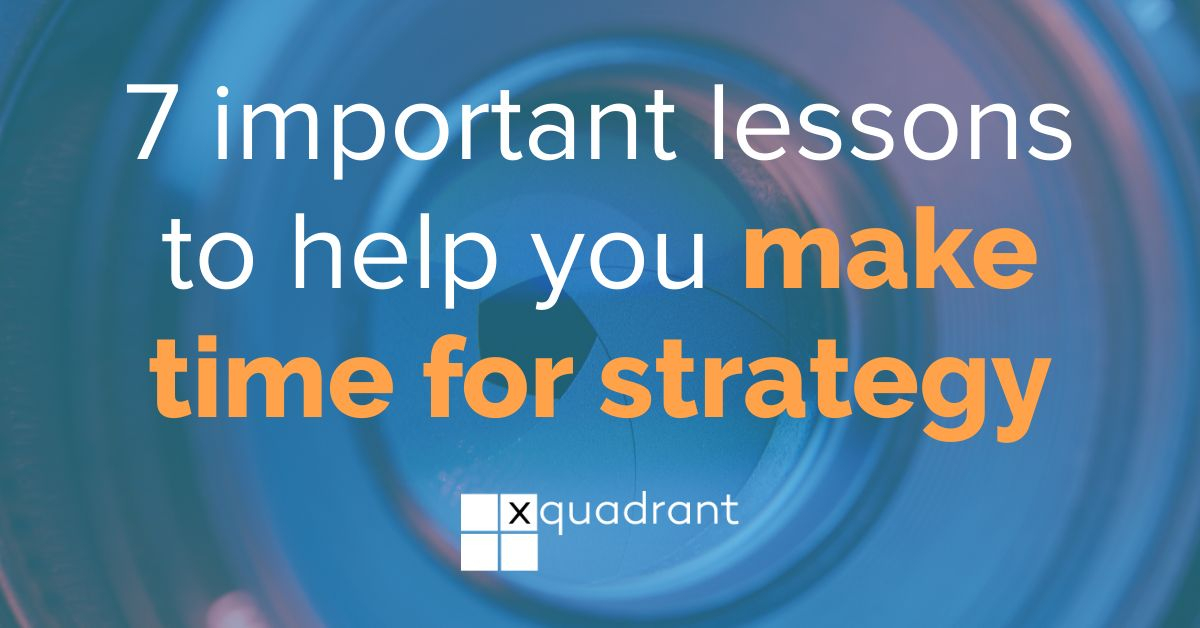 7 important lessons to help you make time for strategy

We just wrapped up Season 12 of the Impact Multiplier CEO Podcast, which we entitled “Making Time For Strategy”. Davina Stanley interviewed me about what inspired me to write the book and what some END_OF_DOCUMENT_TOKEN_TO_BE_REPLACED

7 important lessons to help you make time for strategy 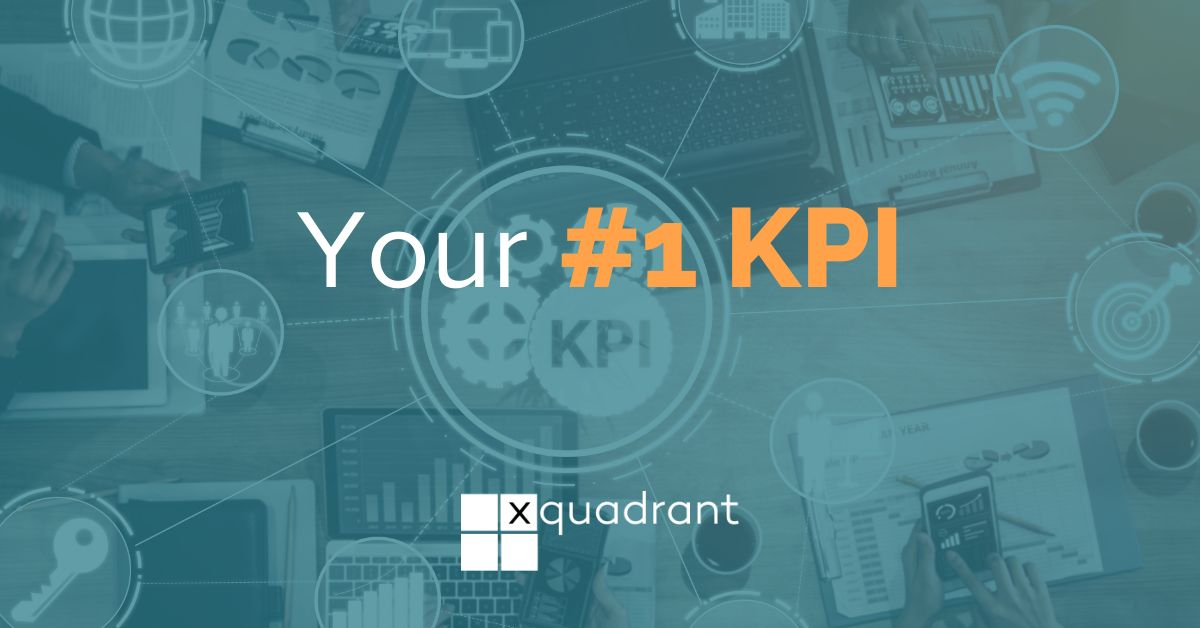 The #1 metric I discovered from speaking with 75 CEOs

Interviewing 75 of the world’s top CEOs told me one thing about creating exponential impact.But let me start with a story from a couple of weeks back.I took a half-day END_OF_DOCUMENT_TOKEN_TO_BE_REPLACED

The #1 metric I discovered from speaking with 75 CEOs

How to master ‘strategic laziness’ this year

“Being crazy-busy is just part of executive leadership, right?”This was a comment from a CEO client of mine, pulled in a million directions by her board, her team and her END_OF_DOCUMENT_TOKEN_TO_BE_REPLACED

How to master ‘strategic laziness’ this year