Ready to up your game?

If you're an ambitious high-performing executive, apply for a free 1:1 consultation. We'll build a personalised roadmap to your next level of impact.

The 5 Dysfunctions Of A Team: summary, review and hidden limitations

If you want to take your team from good to great, you need to rethink the assumptions and mental models that are keeping you stuck at good.

When we find new and more powerful ways of thinking about teams, new avenues and opportunities become clearer.

One of the mental models that has quite probably found its way into your mind in one form or another, is that of Patrick Lencioni’s “The Five Dysfunctions of a Team”, a best-selling business book originally published in 2002 that had a profound impact on the team development world.

The story introduces a new model for team work, the 5 Dysfunctions of a Team Model, which has been widely used, adapted and bastardised to a framework for team development workshops around the world.

There are some helpful ideas in the model. However, there’s also some dangerous and misleading assumptions and some major omissions. Understanding these gaps will generate a breakthrough in how you develop teams.

So, in this article we:

PART 1: The 5 Dysfunctions Of A Team: Summary

The 5 dysfunctions of a team are normally depicted as a pyramid, thus: 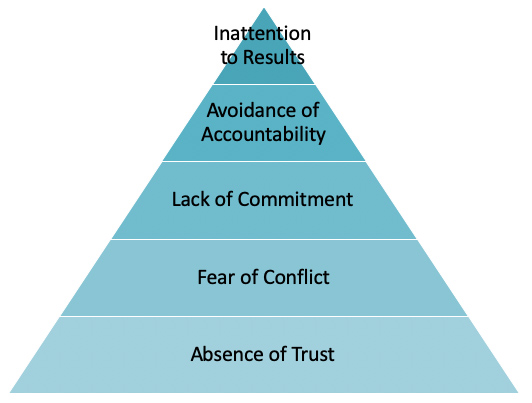 Absence of Trust: The 1st of the 5 dysfunctions of a team

The first of the 5 dysfunctions of a team is the absence of trust between the members.

Lencioni rightly distinguishes between two types of trust, which I will call “transactional trust” and “relational (vulnerability-based) trust”.

So the first dysfunction occurs when teams are so focused on transactional interactions that they haven’t built the deeper relationships of trust that will be needed when external stresses and pressures mount.

A team needs to be able to have a full-on intellectual debate around ideas, principles, approaches and strategies - and to put their cards confidently on the table.

Fear of Conflict: The 2nd of the 5 dysfunctions of a team

You see, if teams don’t have relational trust, there will be a fear of conflict, and this, perhaps surprisingly, the 2nd of the 5 dysfunctions of a team.

A lack of conflict sounds good, right? As one of the fictional characters, co-founder Martin Gilmore points out in the book: “how will fighting more often help the team?”

But this is not about personal conflict; it’s about constructive and ideological conflict. A team needs to be able to have a full-on intellectual debate around ideas, principles, approaches and strategies - and to put their cards confidently on the table.

Without this, you get “Artificial Harmony”. People don’t speak up and fully express their point of view, and so on the surface there’s agreement but underneath there’s frustration, tension and resentment.

Lack of Commitment: The 3rd of the 5 dysfunctions of a team

If a team doesn’t engage in constructive and ideological conflict and debate, it will fail to secure the full commitment of each member.

The CEO, Kathryn, explains that commitment isn’t about consensus. It’s about buy-in and allowing everyone to explain their point of view during conflict.

So many times I hear teams saying “we need to start to present a unified front after our meetings” - instead of the corridor conversations afterwards where team decisions are criticised and reopened.

This is a classic symptom of a team where surface-level agreement has been obtained, without a full debate and a proper securing of commitment.

One simple technique I’ve personally found useful for building commitment is assuming that “silence means disagreement”. Often we assume that silence means people agree with us - but often it means people aren’t comfortable engaging in healthy conflict - and, as leadership author John Maxwell points out, if people don’t weigh in they won’t buy in”.

So, lack of commitment is the 3rd of the 5 dysfunctions of a team.

If a team doesn’t engage in constructive and ideological conflict and debate, it will fail to secure the full commitment of each member.

Avoidance of Accountability: The 4th of the 5 dysfunctions of a team

If you don’t have commitment and buy-in, you don’t really have an agreement that allows you to hold each other accountable to the action points and behaviours you have discussed.

Without a true agreement, people simply don’t take accountability: they feel a decision has been thrust upon them without their assent and very simply the project in question simply hasn’t made it on their personal priority list.

Avoidance of Accountability is the 4th of the 5 dysfunctions of team, and it shows up as missed deadlines and unproductive behaviours going unchallenged.

Inattention to Results: The 5th of the 5 dysfunctions of a team

Without accountability, a team has no basis for feeling confident that everyone will pull together to deliver collective results.

If you don’t trust your team to have your back and to deliver their part, it’s extremely hard to be committed to a collective outcome.

Inattention to (shared, collective) results is the 4th of the 5 dysfunctions of a team. I have found this often shows up in executive teams: everyone is focused on their own (functional) performance, but not on collective (executive team) performance!

Indeed, one question I love asking my own clients is the same question that Kathryn asks her executives which team they consider their primary team:

“Is it our team, or your department’s team?”

I use this visual tool to capture the question: 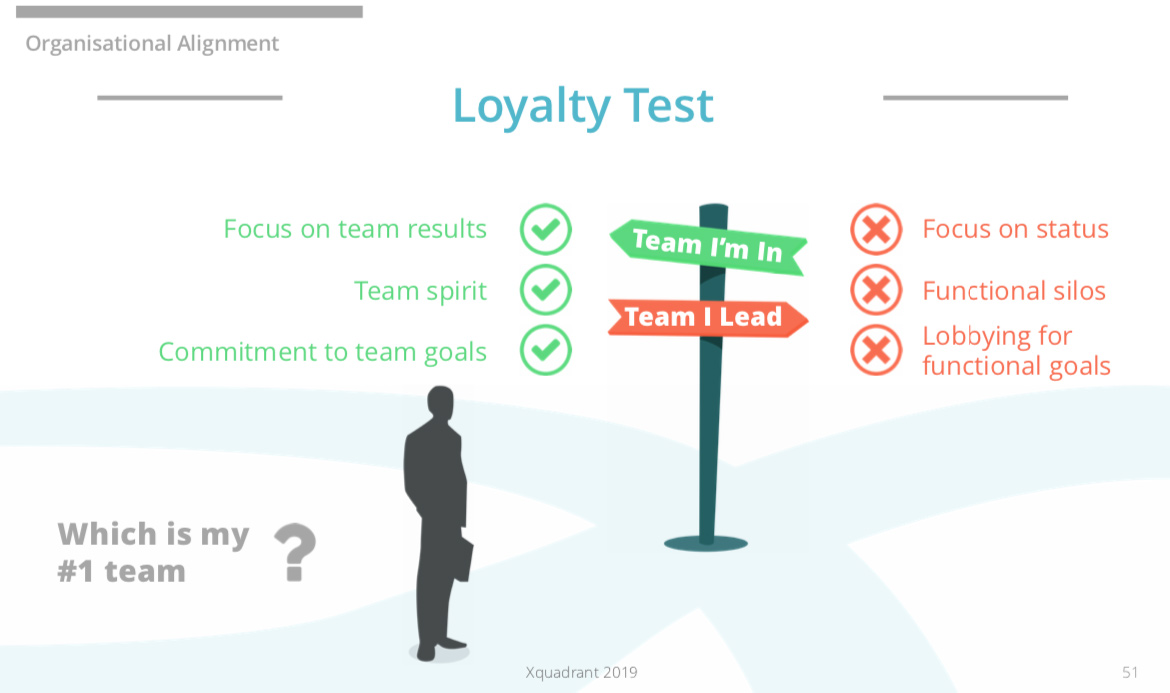 Very often, people feel more loyalty and commitment to the team they lead than the team they are a part of - despite the fact that, logically, the senior team should really be primary. This often comes down to this sense that the leadership team isn’t really attending to a common and compelling outcome.

PART 2: Problems with the 5 Dysfunctions Of A Team model

So, that’s the model. It’s a good framework, and it does offer some truly valuable insights.

However, “the map is not the territory”, and as we dig deeper we’ll find the framework is helpful, but surprisingly limited.

Since when is the most helpful way to think about anything to focus on how dysfunctional it is?

Whilst we do want to pinpoint and address limiting factors in our team’s performance, far better to do so from a genuine appreciation of the strengths to build on and the opportunities to be seized.

Whilst many have attempted to fix this by simply flipping the language (absence of trust becomes presence of trust, etc.), the model remains essentially one of addressing weakness.

The 5 Dysfunctions Of A Team model brings some truly helpful insights about interpersonal relationships: the power of vulnerability-based trust, the importance of a frank debate of ideas, the importance of deciding that the team’s results takes priority over the sub-teams, and so forth.

However, the scope of the model is limited, and is primarily focused on these internal team dynamics (trust, debate, commitment and accountability, etc.).

The problem is that these are not the only issues that determine the effectiveness of a team. How about:

The model is beguiling by its simplicity and humanity, but it leaves many key topics ‘off the radar’.

This has resulted in a preponderance of team-building workshops and interpersonal working styles assessments - leaving other key limitations of the team unaddressed.

I’m not diminishing the importance of interpersonal trust, frank debate and a commitment to a shared outcome - far from it. I work on these subjects often with my clients.

But we have to think more broadly about what the limiting factors in our team’s success might actually be.

PART 3: Discover all 5 limitations - and a new way forward

This article is getting long, and there’s plenty more to say.

If you’re interested in understanding all five limitations of the “5 dysfunctions” model then subscribe to our complimentary email course, “Taking Your Team From Good To Great”.

We dive deeper into the framework, discover its hidden flaws and how they have probably influenced your own thinking about your team without you even knowing it.

Then we build a more robust and helpful approach for the challenges of teams in today’s complex and hyper-connected world.

Taking Your Team From Good To Great

In this 9-part email course, rethink the mental models you use to develop your leadership team and discover practical and under-utilised strategies to improve its effectiveness.

The CEO Radar: mapping the six areas of CEO mastery

Webinar: Nailing your next leadership challenge

Want to create more impact than ever before?